Most people believe that Texas Hold’em is poker. If you believe the same, you have a very narrow view of the poker world. There are many variants of poker available around the world, and it is wise that you learn other forms of poker. Omaha poker is a great place to start.

Outside of Texas Hold’em, Omaha poker is the most popular form of poker in the world. While there are few online poker rooms serving Australian players, there are many Aussies that love to play the game at live casinos or at the few sites still accessible. Today, we will bring you a brief introduction to the forms of Omaha Poker you will see at poker rooms.

The most common form of Omaha poker spread in poker rooms is Pot-Limit Omaha. The game is very similar to Texas Hold’em, but with a couple of unique differences. First, you get four hole cards instead of two.

Some people would think they have a royal flush, when in reality you only have a flush. You can only play the As-Ks in your hand. If someone had the 8s-7s in their hand, they will have a straight flush, and take the pot.

Omaha is a game that is great for those that like to play draws. Since you have more hole cards you have more possibilities. Big drawing hands, such as Q-J-10-9, are huge because they can result in a ton of potential straights. If the hand is also suited, you add flush possibilities as well.

PL Omaha will often produce larger pots than Texas Hold’em due to being a draw heavy game. It is also much more swingy than NL Hold’em because you will often dedicate a ton of money on a big draw.

Another popular form of Omaha poker is Omaha Hi-Lo, also known as Omaha 8 or Better. This game plays the same as PL Omaha but has a split pot element. The player with the best five-card low hand ranking eight-high or below will win half of the pot.

If you have a hand such as As-2s-5c-10c, and the board falls 8c-6c-3c, you have an A-2-3-6-8 for low. You also probably notice that you also have a ten-high flush. In this game, you can play different cards for high and low. You don’t have to use the same two cards to make both hands. 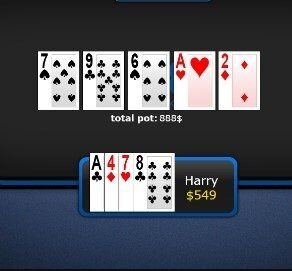 The object of this game is to scoop pots, meaning you win both high and low. Low starting hands with four cards under eight are ideal with hands containing an A-2 being the best starting hands.

This is another game that has a lot of action because you have players going after both halves of the pot. The most common form of Omaha Hi-Lo is limit but PL Omaha Hi-Lo has gained a massive following in recent years.

Two variants of Omaha that you will find at online poker rooms are Five Card Omaha and Courchevel. Five Card Omaha is the same as PL Omaha, but you get five hole cards instead of four. The additional hole card gives players more chances to draw, making it more important you draw for the nuts in this game.

Courchevel is a variant of Five Card Omaha with a twist. You get five hole cards, but pre-flop the first card of the flop is exposed. This gives players an idea of how to play their hands. If you know that you’re going to start with a set or you have three cards to a straight or flush, you’re probably going to be playing the hand. It also helps you get rid of junk hands quickly.

Be Careful Playing on VPN at Online Poker Rooms

If you’re in Australia and thinking of using a VPN to try Omaha poker, think again. While you can get away with playing at online casinos using a VPN, many online poker rooms will block your account for using a VPN. If you sign up and play using a VPN, the poker room can confiscate your earnings.

However, if you don’t have access to real money poker rooms, there are many rooms that offer free play poker games where you can get accustomed to playing Omaha poker before trying your hand at live poker games.

Learning other forms of poker not only gives you an added potential revenue stream but will make you a well-rounded poker player.

James is an Australian writer for SunVegas Casino. Starting out as a semi-professional poker player, he transitioned to media side. He's been in the industry for years, and knows the best places to find pokies.

For those of you that regularly play at Australian online casinos, you likely have played on various pokies or other online casino games off...

Victorian Nationals MP, Russell Northe has resigned due to problem gambling and depression. This is following a paid leave since June 2017.